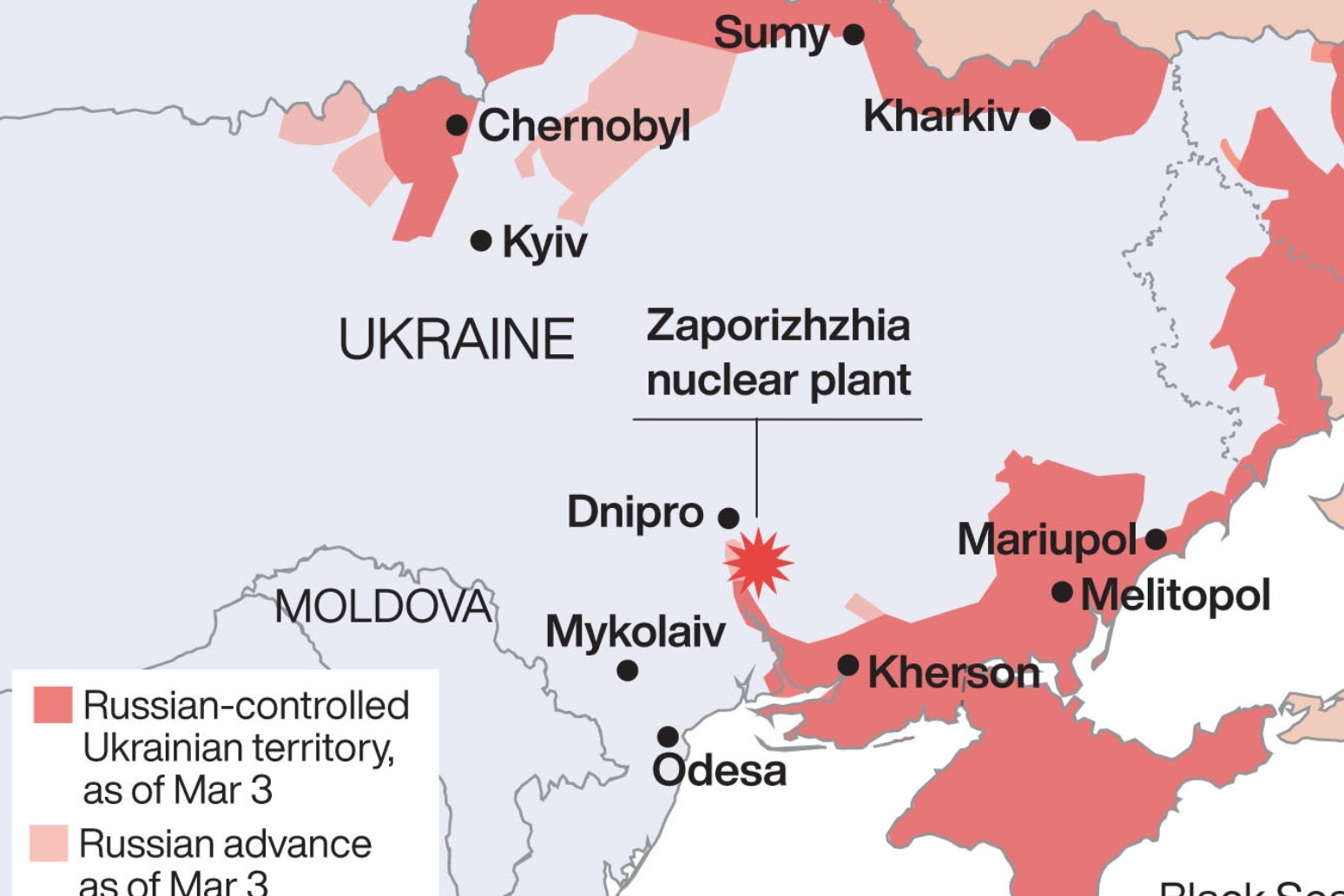 Vladimir Putin appeared to be preparing Russians for a possible scaling back of his ambitions in Ukraine away from seizing Kyiv to fighting for control of the east.

As the Russian President’s troops suffered a series of setbacks, Moscow said the “special military operation” would now focus on the “main goal, liberation of Donbas”.

There were hopes the move could amount to a scaling back of the invasion, as Ukrainian troops were believed to be regaining ground around the capital of Kyiv.

Western intelligence also suggested a Russian brigade commander, Colonel Medvechek, was deliberately run down and killed by his own troops.

In a terse readout following the 50-minute telephone call, a No 10 spokesman said they had discussed “a range of issues of mutual interest” including the situation in Ukraine.

The contact came after Nato leaders urged China to “abstain” from supporting Russia’s war effort and to refrain from any actions that would help it circumvent sanctions.

In the besieged city of Mariupol, authorities said about 300 people died in a Russian airstrike earlier this month on a theatre where hundreds of people were sheltering.

If confirmed, it is likely to lead to renewed calls for Western powers to step up military support for the Ukrainian forces.

Facing unexpectedly fierce resistance, the Russian defence ministry said that having accomplished the “first phase” of military operations, its forces would concentrate on the Donbas region part-held by Moscow-backed separatist rebels.

In his night-time address, Ukrainian president Volodymyr Zelensky said more than 16,000 Russian troops had been killed in the conflict as he called for Moscow to negotiate an end to the war, but warned he would not give up sovereign territory.

Western officials said the Russian statement was a recognition its forces were overstretched and may have to “pause” operations around Kyiv and other cities while they focus on the east of the country.

“It is clear that Russia is recognising that it can’t pursue its operations on multiple axes simultaneously,” one official said.

“Therefore it is having to concentrate its force, particularly its logistics supply and its firepower, on a more limited number of approaches.”

Former British ambassador to the US Lord Darroch believed Mr Putin was attempting to recast his aims, having said at the outset one of them was to “denazify” the government in Kyiv.

“I think he’s trying to get his version of events out first. It’s a pretty shaky story, let’s face it, but he’s trying to create the narrative in the hope the Russian people will buy it, and conceal quite how badly this has gone,” he told BBC Newsnight.

The former diplomat said “it’s certain that this actually wasn’t the plan”, adding: “They didn’t launch a multi-fronted invasion a month ago to now say well actually it’s just about Luhansk and Donetsk.”

An intelligence assessment from the UK Ministry of Defence said Ukrainians were continuing to push back against Russian forces advancing on the capital.

“Ukrainian counter-attacks, and Russian forces falling back on overextended supply lines, has allowed Ukraine to reoccupy towns and defensive positions up to 35 kilometres (22 miles) east of Kyiv,” it said.

Nato has estimated that in four weeks of fighting, between 7,000 and 15,000 Russia troops have been killed in combat – compared to the 15,000 they lost in 10 years in Afghanistan.

One Western official said of the 115 to 120 battalion tactical groups the Russians had at the start of the operation, 20 were no longer “combat effective”.

In other developments, environment minister Victoria Prentis told the Telegraph she had taken in a Ukrainian refugee who is a friend of the MP’s daughter