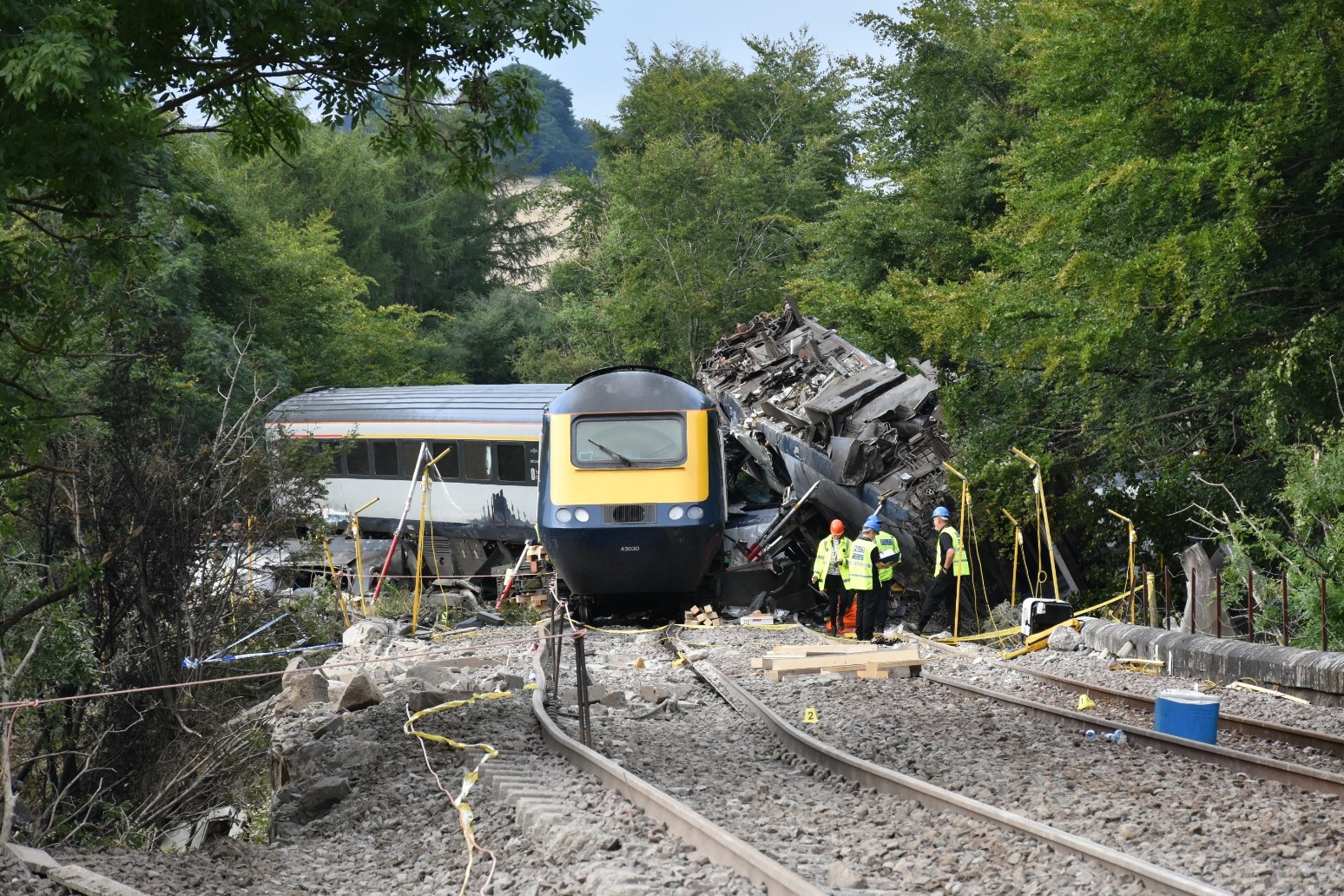 A union is calling on the rail regulator to withdraw all high-speed trains from service for safety checks after a report into the Stonehaven rail crash highlighted corrosion issues.

The Rail Accident Investigation Branch (RAIB) report into the crash, which claimed three lives, found that there were areas of corrosion in damaged areas of the coach structures.

While the incident on August 12 2020 was caused by the train hitting gravel which had been washed onto the track, the report found the train involved was designed before modern safety standards were introduced.

Those who died were the driver, Brett McCullough, 45; the conductor, Donald Dinnie, 58; and a passenger, Christopher Stuchbury, 62, while the other six people onboard were injured.

The TSSA union has written to the Office of Rail and Road (ORR) asking it to instruct rail companies across Britain, including ScotRail, to withdraw their Mark 3 vehicles from passenger service “because of the risk they pose to passengers being able to survive in derailment conditions.”

The RAIB report found that the coaches involved in the accident had been extensively refurbished in 2019 by Wabtec but that there are no photographic records of the work done.

TSSA general secretary, Manuel Cortes, said: “The fact that there is no photographic evidence that Wabtec carried out the corrosion repairs on the derailed HST is a red flag for every other high-speed train (HST) currently running.

“We cannot allow possibly unsafe trains to continue to run on Scotland’s railways. I’ve written today to Ian Prosser, the Chief Inspector of Railways and Director of Railway Safety, calling on him to instruct rail companies across Britain, including ScotRail, to withdraw their HSTs from passenger service because of the risk they pose to passengers being able to survive in derailment conditions.

“Frankly, it’s time to ban the HSTs from our railways. They were great in their day, but that day is nearly 50 years ago now and they simply aren’t up to modern safety standards. But, at very least, the ORR must take every HST out of service until they can be thoroughly checked for signs of corrosion and necessary repairs made.

“It would be disrespectful to the memories of Brett McCullough, Donald Dinnie and Chris Stuchbury, if we don’t take action now to ensure accidents like this never happen again.”

The RAIB report found that the refurbished HST train involved in the crash was designed before modern safety standards came into force.

It concluded “it is more likely than not that the outcome would have been better” if a train built to current regulations was involved.

The report recommends that owners of mark 3 coaches and other rail vehicle fleets susceptible to “significant levels of corrosion” should establish criteria for the “allowable extent of corrosion in safety critical areas of rolling stock”.

An ORR spokesman said: “Our thoughts remain with the families of Christopher Stuchbury, Donald Dinnie and Brett McCullough and we welcome the Rail Accident Investigation Branch report and detailed recommendations that need to be addressed with urgency.

“As the safety authority, ORR will be working rapidly with all the parties that the RAIB recommendations are directed at, to review their initial response, and lead in setting out a clear plan for how the recommendations will be addressed and action taken.

“The specific RAIB recommendations on high-speed trains affect many parties and so we will be bringing all these organisations together as soon as possible to start a review to identify if there are reasonably practicable improvements that can be made regarding high-speed trains.

“It is a strength of our rail system that safety standards improve over time to ensure our railway remains one of the safest in Europe.

“The arrival of a higher standard does not render earlier designs unacceptable and we have no evidence to suggest that the high-speed train should be withdrawn from service.”

Ian McConnell, ScotRail’s chief operating officer, said: “The RAIB report is clear that the high-speed trains were not the cause of the accident and there is insufficient evidence to show that a more modern train would have prevented the derailment.

“As the RAIB report notes, high-speed trains have operated across Britain for many years with a good safety record. These trains have received all the necessary legal and safety certifications authorising them as safe to operate on the rail network in Britain.”