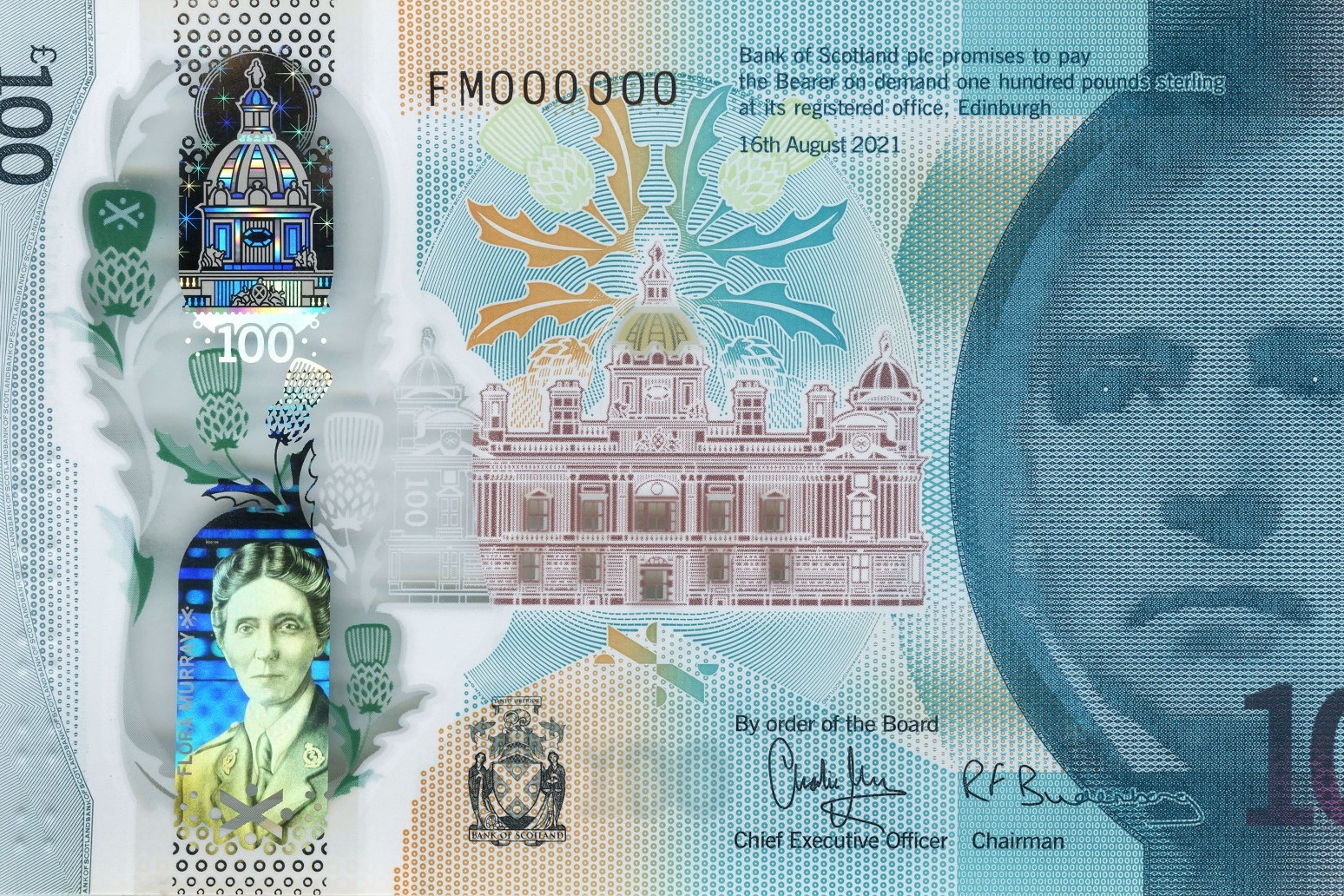 Dr Murray will be on the back of the green polymer note to be released next month, the Bank of Scotland announced on Monday, with novelist Sir Walter Scott, alongside an image of The Mound in the Edinburgh, on the front.

Philip Grant, chairman of the Scottish Executive Committee at the Bank of Scotland, said: “We are so proud that our new £100 polymer note commemorates the remarkable work of Dr Flora Murray who, alongside being a medical pioneer, spent her adult life fighting for women’s rights as a suffragette.”

The new note, which will replace the cotton version, also has a number of updated security features including a see-through window and a holographic foil strip which displays her image.

Born in Murraythwaite, near Dumfries, Dr Murray was a physician and committed member of the Women’s Social and Political Union suffragettes.

She qualified as a doctor in 1905 and, in 1912, founded the Women’s Hospital for Children in London with her lifelong partner, Dr Louisa Garrett Anderson, which provided healthcare for children of poor factory and shop workers.

They were such a success that, in 1915, the British war office provided them with premises in London, which they transformed into Endell Street Military Hospital, the first in the country set up for men by female medical professionals.

Her portrait on the new note, which will join other Scottish notes in having tactile features to aid the visually impaired, was painted by Francis Dodd in 1921 and is accompanied by an image of female stretcher bearers outside the Covent Garden hospital, which the bank said brought to life the significance Dr Murray had on the medical world and the fight for women’s rights.

Caroline Clarke, chief executive of the Royal Free London NHS Foundation Trust, the first institution in the country to train women in medicine, said the note gave Dr Murray “her rightful place in the pantheon of British medical history”.

“Almost a century since her death, Flora’s story is a reminder of the huge debt of gratitude we owe to those early agitators who refused to accept the limitations imposed by a society that didn’t believe women could, or should, be doctors, physicians and surgeons,” she said.

On May 9, the day the note enters circulation, the Bank of Scotland will auction off 94 sought-after notes with an FM prefix to celebrate her initials, alongside AA prefix notes.

Money raised from the auction will go to the bank’s charity partner, Mental Health UK, and the Royal Free Charity, London.