Russia to observe ceasefire in two areas of Ukraine reports 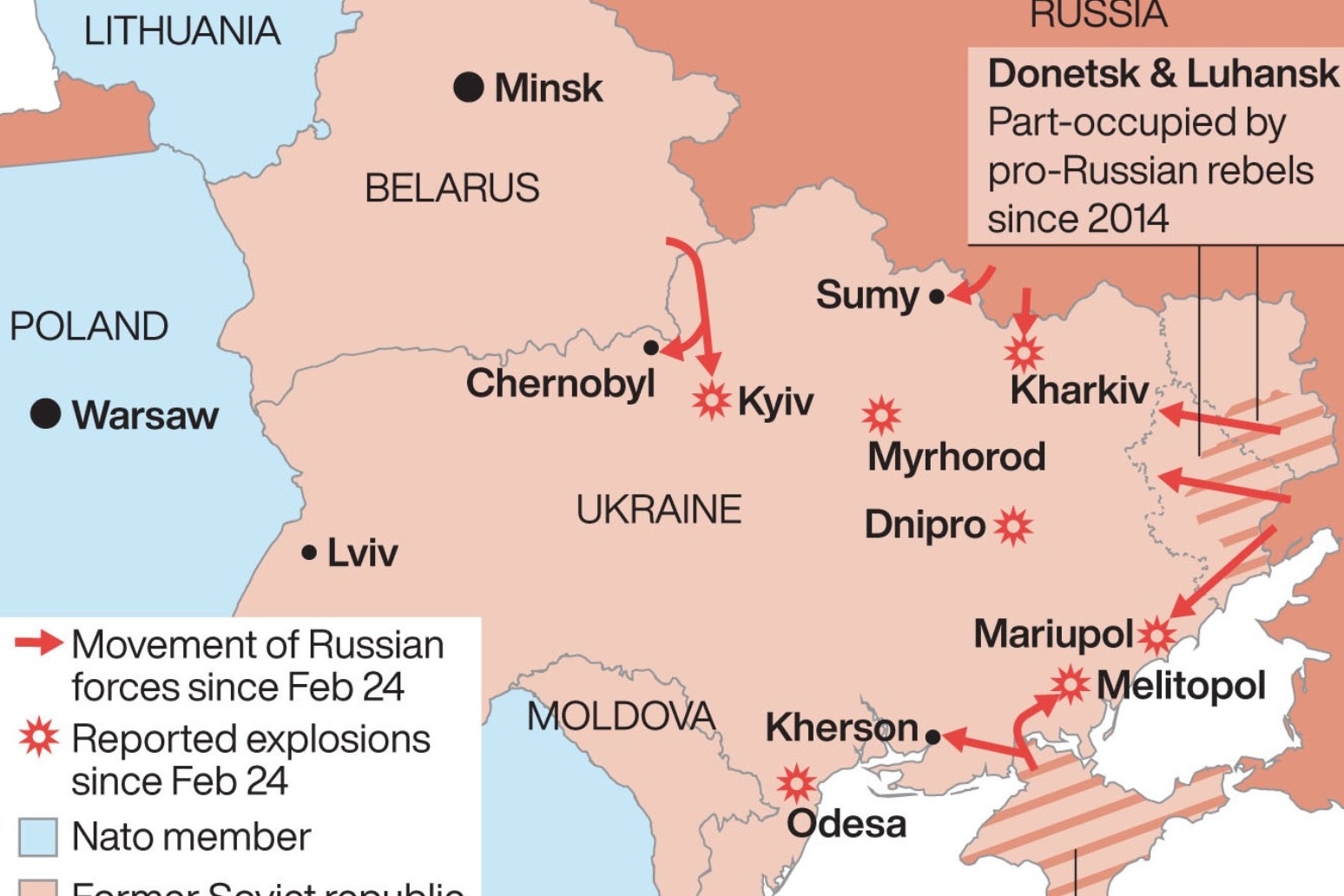 The Russian military will observe a ceasefire in two areas of Ukraine starting on Saturday to allow civilians to evacuate, according to state media reports.

The Russian defence ministry said in a statement carried by the RIA Novosti and Tass agencies it has agreed on evacuation routes with Ukrainian forces to allow civilians to leave the strategic port of Mariupol in the south-east and the eastern town of Volnovakha.

There was no immediate confirmation from Ukrainian forces, and it is not immediately clear how long the evacuation routes would remain open.

If confirmed, the move would be the first breakthrough in allowing civilians to escape the war.

The head of Ukraine’s security council, Oleksiy Danilov, had called on Russia to create humanitarian corridors to allow children, women and the elderly to escape the fighting, calling such corridors “question No 1”.

As Russian forces batter strategic locations, Ukrainian President Volodymyr Zelensky has lashed out at Nato for refusing to impose a no-fly zone over his country, warning that “all the people who die from this day forward will also die because of you”.

But as the United States and other Nato members send weapons for Kyiv and more than one million refugees spill through the continent, the conflict is already drawing in countries far beyond Ukraine’s borders.

Russia continues to crack down on independent media reporting on the war, also blocking Facebook and Twitter, and more outlets say they are pausing their work inside the country.

And in a warning of a hunger crisis yet to come, the UN World Food Programme says millions of people inside Ukraine, a major global wheat supplier, will need food aid “immediately”.

Ukraine’s leader is set to brief US senators on Saturday on a video conference call as US congress considers a request for 10 billion dollars (£7.5 billion) in emergency funding for humanitarian aid and security needs.

In a bitter and emotional speech late on Friday, Mr Zelensky criticized Nato over the lack of a no-fly zone, saying it will fully untie Russia’s hands as it escalates its air attack.

“The alliance has given the green light to the bombing of Ukrainian cities and villages,” he said, warning that “the history of Europe will remember this forever”.

Nato Secretary-General Jens Stoltenberg had earlier ruled out the possibility of a no-fly zone, saying Nato planes would have to shoot down Russian aircraft.

In a separate video message to anti-war protesters in several European cities, Mr Zelensky continued to appeal for help. “If we fall, you will fall,” he said.

The UN Security Council will hold an open meeting Monday on the worsening humanitarian situation.

The UN estimates that 12 million people in Ukraine and four million fleeing to neighbouring countries in the coming months will need humanitarian aid.

While the vast Russian armoured column threatening Ukraine’s capital remained stalled outside Kyiv, Mr Putin’s military has launched hundreds of missiles and artillery attacks on cities and other sites across the country.

Russian forces did not make significant progress on Friday in their offensive to sever Ukraine’s access to the Black Sea and the Sea of Azov, which would deal a severe blow to its economy.

There were also no changes in the north and the east, where the Russian offensive has stalled, meeting fierce Ukrainian resistance.

He said Ukrainian forces were still holding the northern city of Chernihiv and the southern city of Mykolaiv.

More than 840 children have been wounded in the war, and 28 have been killed, according to Ukraine’s government.

A total of 331 civilians had been confirmed killed but the true number is probably much higher, the UN human rights office said.