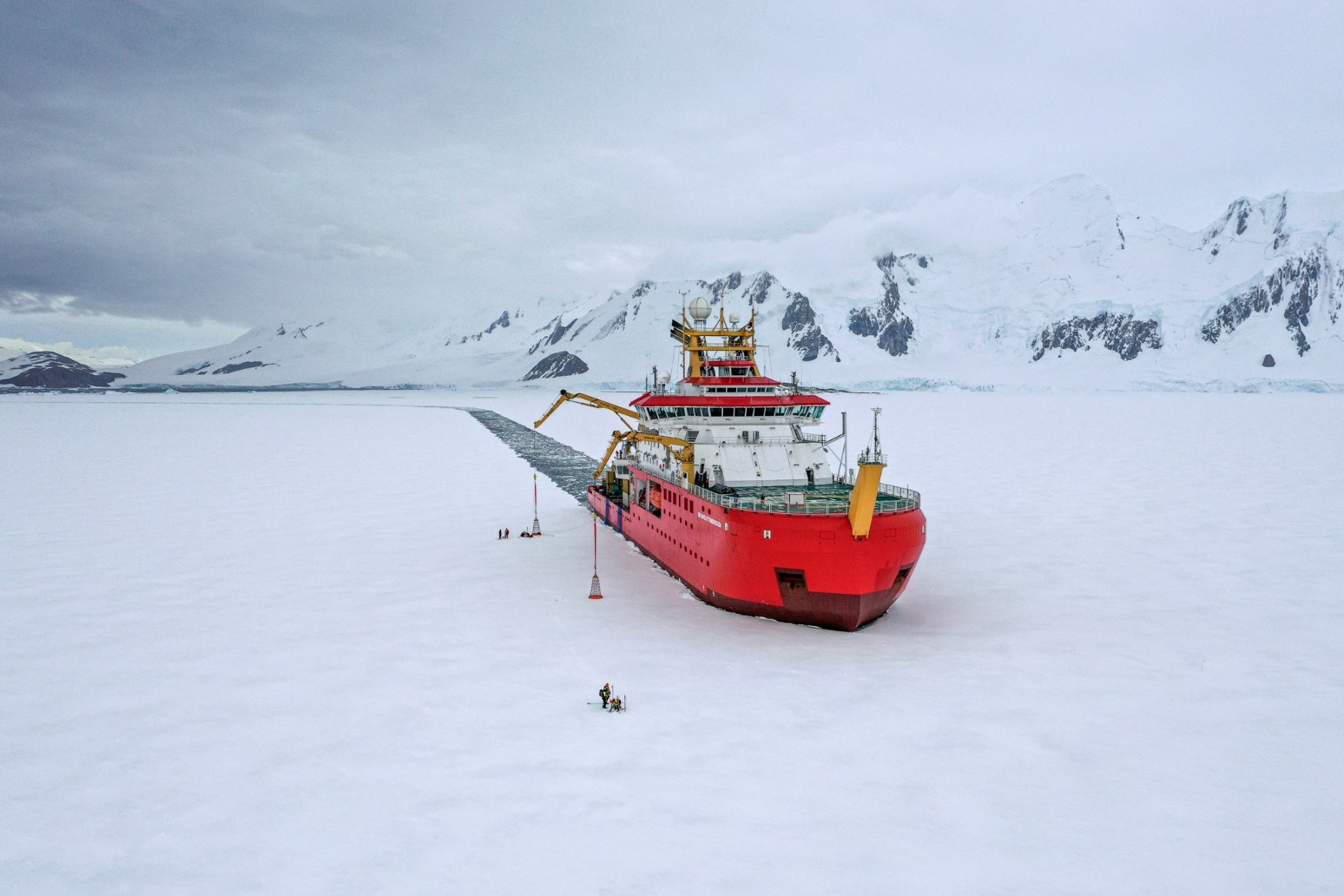 Research ship the RRS Sir David Attenborough has completed “ice trials” during its maiden voyage to Antarctica, a key milestone in the vessel’s commissioning.

The trials saw the polar research ship tested through ice at every power level to measure its performance against expectations, with the vessel’s captain saying the team were “really pleased” with its performance.

The team carrying out the trials also performed a range of manoeuvres including reversing, turning and impact tests going into the ice at different speeds, in icy areas of sea around the Antarctic Peninsula and Bellinghausen Sea.

The British Antarctic Survey (BAS), which operates the RRS Sir David Attenborough, said the team used satellites to locate suitable areas of ice for the trials.

Most manoeuvres were done in fast ice – which is attached to the coast and not moving – allowing the team to calculate accurately the amount of energy needed to break the ice, while tests were also conducted in open and closed pack ice.

BAS’s Ralph Stevens, captain of the RRS Sir David Attenborough, said: “Overall, we’re really pleased with the ship’s performance in ice trials – in some trials it actually performed better than we expected.

“The trials did highlight some issues with the ship which need to be addressed but this was expected – the SDA is a bespoke ship with a complex design, and the purpose of trials is to find the things that don’t work so well.”

He added: “The thing that surprised us most was how comfortable the ship was while breaking through the sea ice.

“The bow breaks the ice in a completely different way to our previous vessels, and is much quieter than expected.”

But, after the trials, the ship encountered unprecedented sea ice conditions – of second-year sea ice covered in a thick 5ft (1.5m) layer of snow – which hampered efforts to reach Stange Sound to deliver key science cargo to support the International Thwaites Glacier Collaboration.

The RRS Sir David Attenborough is a Polar Ice Class 5 ship, which means it is able to break through ice 3ft (1m) thick at a speed of three knots (3.5mph/5.6kph) using its 15,000 tonne weight to break through, the team said.

BAS’s John Harper, captain of the RRS Sir David Attenborough during the ice trials, said the ship broke through more than nine miles (15km) of second-year fast ice which was over 6.7ft (2m) thick – well beyond the expected ability for the ship of that polar class.

“While it was frustrating we couldn’t reach our drop-off point, encountering these conditions has been an incredible learning experience and has given us the opportunity to push the ship to its limits and really see what it can do,” he said.

Of the tests, Professor Dame Jane Francis, director of British Antarctic Survey, said: “This is another significant milestone for the ship and I’m delighted to see it performing well.”

Referring to the UN climate summit held in the UK last year, she said: “Following Cop26 in Glasgow last year, the world is more aware than ever of the urgent need to understand our changing world, and the RRS Sir David Attenborough has a vital role to play in that.”

The research ship is designed to provide scientists with state-of-the-art facilities to study the oceans, seafloor, ice and atmosphere.

It set sail on its maiden voyage in November and will return to the UK in June for several weeks in refit to rectify issues identified in the ice trials and finish commissioning science equipment, and carry out science trials at sea.

The vessel is owned by research institution UKRI-NERC, and, while a public vote to select its title backed the name Boaty McBoatface, officials intervened to name it after Britain’s famed broadcaster and natural historian.

A research submarine carried on the ship has instead taken the name elected by the public.